Sioux County, located in the northwest corner of Iowa, was formally organized on January 20, 1860. Its name is in honor of the Sioux Indian tribe, which was once prosperous in the area. Sioux means ‘Snakes’ or ‘Little Snakes’.

The first county seat of Sioux County was Calliope. It was a small village, established in 1860 with no more than 15 residents, the entire population of the county at that time. 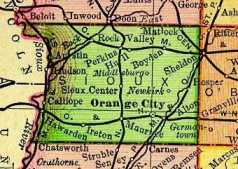 The first courthouse was built in Calliope in 1860. It served the county until 1872 and was a one-and-one. The name means either “People of the Yellow Earth”or “red bana-half story log cabin. It contained portholes, like a fort, for protection from outlaws and Indians. The building also served as living quarters for county officials and other residents.

It was not long before a rivalry developed between the two towns. This rivalry became so heated that, on January 22, 1872, 55 bobsleds left Orange City bound for Calliope. Along the way they met up with 25 more sleds from the Hull area. When these raiders arrived at Calliope, they cut a hole in the log courthouse and removed the safe and all of the county records contained within. They then hauled the 5,000-pound safe back to Orange City.

The safe and county records were later returned to Calliope with the agreement of both towns. However, the county seat was officially removed to Orange City with an election held in November 1872.

The old log cabin in Calliope was sold and county offices were scattered around Orange City for several years. Then, with the help of a bond issue, the construction of a red and buff- colored sandstone building began in June 1902. Construction was stalled when the construction company went bankrupt later that year.

The building was finally completed in October 1904. There was a huge celebration containing bands, glee clubs, speeches and even fireworks. M.P. Van Oosterhout of Orange City furnished two 1,400 pound steers for the barbecue.

Lightning struck the courthouse tower in 1907, knocking off about four feet of the pinnacle, which broke many roof tiles. A 10-foot bronze statue of “Lady Justice” (Vrouwe Justitia), replaced the broken pinnacle.

From 1976-1982 extensive improvements were made to the courthouse and its facilities: a new roof, renovated courtroom, an elevator, the latest computer system, and new voting machines. In 1977, the Sioux County Courthouse was placed on the National Register of Historic Places.

Taken from History of County Governments in Iowa, published in 1992 by Iowa State Association of Counties, Des Moines, Iowa